Slots Angels Slot​PLAY NOW
If you ever wanted to be a member of a motorcycle club and spin your wheels on the wide open roads with nothing on your mind but beers, bars, and brunettes and the occasional blond dropout, and nothing in your ears except country rock music, then the Slots Angels slots game is for you. Even if you think you don’t have what it takes to make the grade (for example, you might have a 9 to 5 burger flipping job with child support payments), you can still become an honorary member by just pushing the Spin button on the gaming console. So let’s give this motorcycle-themed game by BetSoft a spin, double entendre intended. 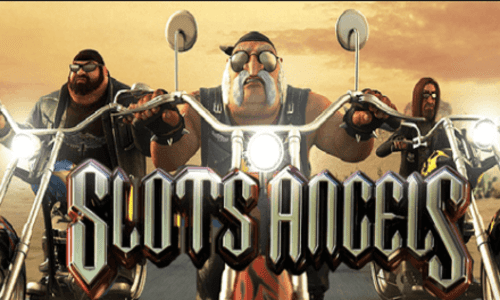 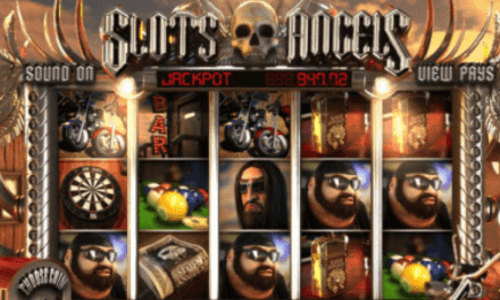 Where to Play Slots Angels Slot​ for Real Money:

Actually, the name Slots Angels is a great name for a weekend motorcycle club that loves to play slots machines in their spare time. Rather cute, I’d say. But this slots game is about the real deal, figuratively speaking. The theme of this game is all about the heavy duty bikers with the traditional rugged and unkempt looks, leather outfits with the silver metal spikes, rebellious demeanor, and carefree attitude coupled with a fierce focus on defending their territory.

One would think that it would be rather difficult to include these many features and this much biker ambiance in a slots game but the makers over at BetSoft does it and does it well. The awesome soundtrack helps to put the final touches of authenticity on this popular and “in your face” game. Just imagine that the bikers are on tour and they make a pit stop in your town at your local bar. Here’s your chance to prove that you can make the Slots Angels’grade.

So beef up your attitude, no, no, more attitude! Now puff up your skills to fix a 6728cc aircraft-derived V-twin custom built motorcycle engine in the dark with one hand tied behind your back and an open beer bottle between your teeth. Okay, you’re in, now take a seat in the chair in front of the gaming console and get ready for the ride of your life.

The symbols and artifacts of the Slots Angels are a Bar, Billiard Balls, Lighters, Bike Groupies, monster Motorcycles, Gang Members, Dart Board, Beers and a Gang Leader. The Gang Leader is a busy kinda fella. He watches your every move on the gaming console, keeps one eye on the Bike chics and the other on the Dart Board while saving just enough time to appear throughout the game on the spinning reels with his other gang members to cheer you on towards higher earnings. Usually, all is calm and well until you make a winning combination on an active payline. That’s when everything springs to life.

Among the creatively crafted key features designed by BetSoft is one it calls the re-spin feature. This feature is tasked to increase multipliers that are triggered following your every win starting on the first win with 1x and progressing from the 2nd, 3rd, 4th and final win with multipliers of 2x, 3x, and 5x, respectively. That is sufficient to gain you many opportunities to win and win big. During the re-spin feature, only the middle reel spins. The algorithm assigned to this feature causes it not to result in frequent wins but when it does trigger, the wins are usually very big indeed. There’s also the Click Me bonus feature, which is triggered by landing three Dart symbols anywhere on the reels. You will then be prompted to select one of the Dart Boards to discover your prize.

Three Beer Bottles anywhere on the screen will activate the Party Free Spin feature, and once it’s activated the middle reel converts into a Wild and the full Biker Gang converges onto the screen to cheer you on as you covet more and bigger wins.

A second Bonus Round is triggered when you manage to place three or more Lead Biker icons anywhere on the playing screen. Following a prompt, you will have to select one of three pictures of members of the Gang to be eligible for extra credits during a bike race between the entire gang and the Lead Biker you chose. Your status and coins move up depending on how many bikers your Lead Biker passes during the race. If your guy wins the race you’ll get a super win.

Coin denominations start with two cents up to fifty cents. If you bet on all 30 paylines, the maximum wager equal 150 coins. The game is also fitted with a Standard Jackpot, which offers a maximum win of 7,500 credits, and a Progressive Jackpot.

You are a success. No more flipping burgers for you! You are now an honorary member of the biggest, badest biker club in your region, the Slots Angels. As such you have shown that you can conquer the game, win Bonus Rounds, enjoy Click Me bonus features, and take on the Wilds and the Scatters that the game has to offer.

Now it’s time for you to go out and find a new recruit and let them know that the online version does not require you to download any software and contains no pop-up ads that try to trick you onto their spamming list by asking for your email address. Let them know that this high-definition 3D slots game is compatible with Windows, Linux, and Macs OS systems and most laptops. It is not quite ready for mobile devices. The game is user-friendly and easy to play and offers ample opportunity to win often and big. Give it a try.