Laws Regarding Cell Phone Use in Las Vegas Casinos

Mobile devices are more common in Las Vegas than slot machines in casinos. Since smartphones are everywhere, they’re not banned from being around the slots or live table games, but how they’re used does matter. Rules and etiquette have changed during the past decade, and casino operators will enforce cell phone use and rules at their discretion. 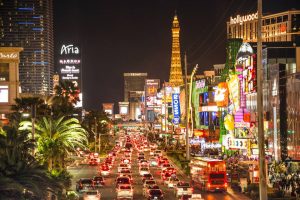 The Aria Casino made it clear in 2016 that they would allow “2-way communication devices” during rounds of poker. Take note of these considerations:

During a World Series of Poker in 2017, a write-up in Poker Listings described how “cell phones have become an epidemic” and players are gazing at the screens when they’re not playing a hand.

Cell Phone Use at Blackjack Tables

Cell phone use at blackjack tables in Las Vegas is now accepted. Recent table renovations at the Palace Station and Palms casinos feature phone charging stations at the tables.

The larger concern is the apps that can be downloaded to the phone.

Cell Phone Use at a Sportsbook

Cell phones were once banned at the sportsbooks in Las Vegas, but that’s no longer true.

Mobile apps are used consistently, and common-sense rules and general courtesy are necessary. Place bets on your iPhone, but don’t talk on it non-stop while watching games. It’s distracting

What’s Not Negotiable with Cell Phones in Las Vegas

Each land-based casino in Las Vegas falls under the authority of the Nevada Gaming Commission, a board that makes one rule clear:  no cheating.

You’ll be welcome to use your cell phone at a casino in Las Vegas as long as you are polite, respectful, and don’t use them to cheat or interfere with the pace of play at tables.

Casinos know that the digital era is here, and even land-based casinos have to keep up with the times. Nearly half of all revenue is made off the casino floor, and since virtually every player has a cell phone, that means casinos must cater to cell phone users if they want to maintain a high flow of revenue.

MGM launched a WiFi gaming network in 2016 that doesn’t require players’ physical presence on the casino floor. This innovation affected a number of gaming aspects:

Beyond the Cell Phone

Technology’s impact on gaming and land-based casinos is expanding far beyond the cell phone. ESP Gaming has a studio to film e-sports events with a live audience. Hosted at the Aria Casino, it originally was built for poker but can accommodate other games.

The goal is to provide an intimate venue that creates a unique digital experience, plus it includes lifestyle content that’s easily viewed on a smartphone.

Because cell phones are welcome in Las Vegas casinos without any specific set of rules that apply universally to all casino and gaming properties, you must be aware of how you’re using your phone, and you must not rely on the technology to play the games.

The Rules for Cell Phone Use in Las Vegas are Simple:

As long as you follow rules of etiquette and do not use any apps to cheat, Las Vegas casinos will welcome you and your cell phone.