Texas Tea SlotPLAY NOW
Texas Tea is another great game meticulously crafted by International Game Technology (IGT). In 2015 Gtech acquired IGT, but kept the famous IGT name and continues to use it still today. The online version of Texas Tea — like all cyber versions made by IGT — is very similar to the original real money land-based machines in Las Vegas. IGT has been able to keep the old world classic feeling of the game while modernizing its attractiveness with visible and unseen bells and whistles in the online version. 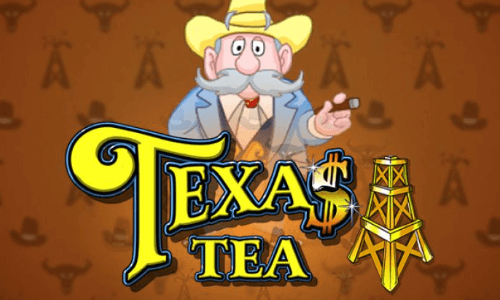 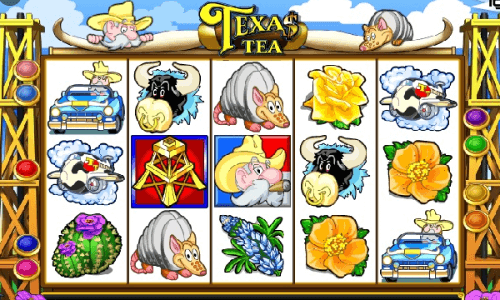 Where to Play Texas Tea Slot for Real Money:

Texas Tea is what is commonly called a classic slots game because it has been around for more than a decade. It has thousands of fans and the main character of the game, Texas Ted, has generated a cult of followers and he actually appears in other IGT slots games. The theme of Texas Tea is that of the oil barons who brought the world the “black gold” from the oil fields of Texas and other nearby US states.

As a consequence, the symbols of the game could readily be expected to be, an Armadillo, a Yellow Rose, a Bluebonnet plant, a flowering Cactus, an Oil Drilling Derrick, a fancy Cadillac convertible, a desert Globemallow plant, a Longhorn Steer, its Logo in the shape of the State of Texas, and Texas Ted, the game’s cartoon character and emcee. Each symbol is important and plays a vital part in your winnings, so pay attention when they land on your reels.

If you land in a row five Texas Tea symbols on a single payline, you are rewarded with 10,000 credits, which is the maximum jackpot. Texas Tea is blessed with not one, but two, Scatter symbols: The Texas Red and the Oil Derrick. Because they function as Scatters, they can help a gamer get additional winning combinations because of Scatters count no matter which payline they land on.

The appearance of at least three Oil Derrick symbols anywhere on the play screen activates the Texas Tea Bonus Rounds. This is a delightful event because the awesome graphics kick in and you see oil begin to ooze down the gaming screen. The sound effects crank up and you hear the sound of globs of thick oil dropping into big puddles — “glop, glop”. This is an awesome effect and is highly original. Thanks, IGT.

After the Texas Tea Bonus game opens, you are prompted to select which Derrick pumps the oil. If you pump a lot of oil, you make a lot of money (coins), just like the real oil tycoons.But first, you have to find out where the oil is located underground. You can’t just set your rig down anywhere, as the early wannabe oil barons learned the hard way.

Accordingly, the game presents you with a map of Texas. Then a cantankerous cartoon figure by the name of Texas Ted appears and invites you to choose three spots on the map. If you are both lucky and wise, you will place your Derricks where there is oil underneath.Assuming you have the good fortune of a true tycoon after you have placed your three Derricks, the oil will start to pump. As the oil pumps, your fortune will begin to mount and bonus prize money will kick in depending on how much your bet was.

As the oil pumps, the graphics are activated once again and you are visited by whirlwinds of money storming from right to left and from left to right on your screen. Excitement galore! There is also an Oil Dividend Bonus. It is triggered when you score at least three Scatter symbols anywhere on the screen. If that happens, Texas Ted shows up and presents you a huge bank check for oil dividends. Yee Haw!!

We’re not finished yet. Another feature of Texas Tea slots is the Big Oil Bonus game. You can activate this sub-game by landing at least three Oil Derricks symbols side by side on an active payline. And … here comes those awesome graphics again. The screen starts to vibrate, the “glop, glop” sound effects blare loudly and an oil well eruption covers the entire screen with shiny black gold!!

Out comes the map of Texas once again and you get to choose from a variety of Oil Derricks. After you wisely choose your Derricks, sit back and watch how much oil your Derricks can pump for you. The more oil your Derricks pump, the heftier your stake becomes.

As you can see, this is a great slots game to play. The payoffs are more than average and the excitement and satisfaction gained from the awesome graphics and outstanding sound effects are worth putting some coins on the line. Experience what it means to be a rich and famous oil entrepreneur. Sit down before a Texas Tea gaming console today. Press the Spin button and watch your bank account expand!