Texas Hold’em Poker not only is the most popular version of poker in the world, it’s one of the world’s most popular casino games period. You likely have seen it in all the poker tournaments on TV, in brick-and-mortar casinos, and at all of the best online casinos.

Upon first glance you might feel like Texas Hold’em poker looks hard, but it’s not in the least! Our complete guide to Texas Hold’em will have even an absolute beginner playing this popular game in minutes. 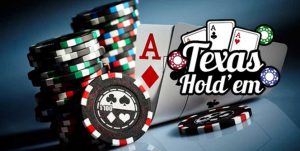 1. Texas Hold’em poker is a game of skill. Nearly every other online casino game favors the house, but Texas Hold’em doesn’t because you are playing against other players instead of the house. While some luck is involved, naturally, the most skilled players usually walk away with the most money. Because you can learn skill through playing experience, Hold’em can be a much more rewarding game than others.

2. Texas Hold’em is dynamic. It is a fast-moving, ever-changing game that requires players to be on their toes. The game dramatically changes every time a card is turned in the middle of the table!

3. Texas Hold’em is easy to learn. While Hold’em strategies take years to master, learning them is easy, and the game itself is a piece of cake.

How to Play Texas Hold’em

Whether you’re playing on one of the best online poker casino sites or at a brick-and-mortar casino, Texas Hold’em game-play follows six stages.

In Texas Hold’em, the only players that bet before the cards are dealt are the two to the left of the dealer. They are called the blinds because the players bet without seeing any cards. All the other players bet after they’ve seen their first two cards.

2. The Hole Cards: The dealer deals two face-down cards to each player (the hole cards). To start play, the player to the left of the player who posted the second blind starts the next round of betting. This is called the pre-flop.

Other players at the table can get in on the game by matching previous bets, or they can fold their hand immediately without betting. Pre-flop betting ends when all players either have bet equal amounts or folded.

3. The Flop: The dealer then throws away the top card of the remaining cards in the deck (called burning the card) in case someone saw the top card and so that no one can cheat during the betting rounds by using marked cards.

The objective from this point is for each player to form the best possible five-card poker hand from their two hole cards and the five total community cards (the Board). After the flop has been dealt, another round of betting takes place, beginning with the player to the left of the dealer.

4. The Turn (or “The Fourth Street”): The dealer then burns another card and deals a fourth card among the community cards. This card is called the Turn. Another round of betting takes place, starting with the player to the left of the dealer.

5. The River (or “The Fifth Street”): The dealer then burns another card and deals the fifth and final community card to the center of the table (called the River). The deal is now complete with five face-up cards in the middle of the table. Players bet yet again at this round, starting with the player to the left of the dealer.

What Are the Betting Limits in Texas Hold’em?

In a game of Pot Limit Texas hold’em, a bet can never exceed the amount of money in the pot. If there’s $10 in the pot, the maximum amount you can bet or raise is $10. However, if you do, the pot rises to $20 and the next player can bet or raise up to $20.

As the name says, in No Limit Texas Hold’em you can bet or raise as much money as you wish – or have — in any betting round.

How to Bet at Texas Hold’em Poker: The Blinds

Other poker games always begin with an ante – a mandatory bet that every player must make before the cards are dealt. In Texas Hold’em, only two players are required to make a mandatory bet before the deal. The player immediately to the left of the dealer must make a predetermined small bet (the Small Blind), and the player second to the left must make a predetermined large bet (the Big Blind). The Big Blind is usually twice the Small Blind.

In a brick-and-mortar casino or an online casino, the cards are dealt by a professional dealer, so the deal does not rotate among the players. In that case, a dealer button passes from player to player each round so that the same players are not (unfairly) forced to make the Blinds every game.

The Blinds allow betting to start for a game without committing every player to a bet. Because the deal (or dealer button) rotates among the players each round, every player will eventually be compelled to post a blind before a round.

How to Bet at Texas Hold’em Poker: The Pre-Flop

After the hole cards are dealt, the player to the left of the Big Blind player starts the betting by placing a bet. That player can match the blind (call) or increase it up to a specified limit (raise). The player then puts this money in the pot.

The player may also choose to opt out of the game (fold). No bet is placed, but the player is no longer in the game. The remaining players then call, raise, or fold until every player has bet the same amount or bailed out of the game.

How to Bet at Texas Hold’em Poker: The Flop, the Turn, and the River

The next betting rounds — the Flop, Turn, and the River — proceed in much the same way as the Pre-Flop. The player to the left of the dealer begins the betting. Players may raise, call, or fold just as before, but they also have the option to check (make no bet at all).

The check is unique to Texas Hold’em. A check always begins with the first player to bet. If every other player also checks, no bets are added to the pot in that round and the next card is dealt for “free.” However, if any player places a bet, the round of betting continues with each player choosing to call, raise, or fold until every player has bet the same amount or folded.

The Showdown, Kickers, and Ties

In the event of a tied hand, the decision often relies on the kicker card. A kicker is the extra hole card or cards not used to make a pair, two pair, three-of-a-kind, or other hand that is tied with another player. For example, it is highly likely for two or even three players to have an identical one pair hand with pairs of the same value. The round is won by the player with the highest value kicker in the hole cards.

The showdown is tied if two or more players have identical hands with high kickers of the same rank (suit doesn’t matter). In that case, the round is a tie and the plot is split evenly between the tied players. With this complete guide to playing Texas Hold’em, you’re now ready to practice and compete at all of the best online poker casinos.